Fortunately, the Aiwa Arc-1 does completely without an app. Just switch it on, connect it to your smartphone or something else and you’re done. Of course, the headphones also reconnect directly if you turn them off and on again. The buttons for volume control are also used for media control. A simple press regulates the volume, if it is held down a title can be skipped or switched back.

An interesting feature is Qconnect. This allows the Arc-1 to be paired with other Bluetooth headphones and allows simultaneous sound playback on both devices. The headset is connected to the smartphone or similar. Once this is done, we put the Arc-1 back into pairing mode. Now we hold the two headphones, also in pairing mode, as close as possible to each other. An acoustic signal signals successful pairing. And it works really well! Since this is a beta feature, it can still cause problems according to the manufacturer. Watching movies together is difficult because of the latency.

The headphones can also be connected to two devices, such as smartphones. You can use both devices to output audio, not simultaneously, but if you’re on the go with your tablet and smartphone, it’ll help.

In the test we connected the Arc-1 to a Huawei P20 Lite. There it happened that the smartphone could not connect directly to the headphones when Bluetooth was switched off. This problem did not occur with other devices. Otherwise, the headset connects quickly to the smartphone if Bluetooth is switched on before switching on the Arc-1. 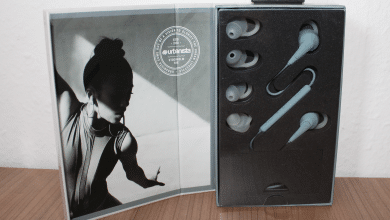