With the ASUS Pro B9, the Taiwanese company set a new world record at this year’s IFA 2019 in Berlin and presented the lightest 14-inch notebook to date. The ASUS Pro B9 weighs only 880 grams with a 33 Wh battery, the optional 66 Wh battery increases the weight to still very light 990 grams. ASUS has not yet published how long the battery life of the two batteries is.

Despite the low weight, the computing power is more than sufficient for common office applications. ASUS uses an Intel Core i7 of the current Ice Lake generation. The notebook doesn’t have a dedicated graphics card due to the low weight and the only 14.9 mm thick case. Two PCIe SSDs with a total storage capacity of 2 TB are used as mass storage, which can be used either as RAID 0 or RAID 1.

ASUS has not yet provided any details on the available RAM and the resolution of the 14-inch display. However, it is already known that the screen-to-body ratio of 94 percent is at the level of the Dell XPS 13, which is still the benchmark for mobility for many users today. A webcam is integrated in the thin edge, which can be deactivated mechanically via a slide switch. In addition, registration via Windows Hello can be done via the fingerprint sensor.

External devices can be connected via two Thunderbolt 3 and one USB 3.1 port. In addition, an HDMI 2.0, a Mini-DisplayPort and a 3.5 millimeter jack plug are available. As is now common practice with ASUS, the touchpad on the Pro B9 can also perform additional functions, for example as a numeric keypad. 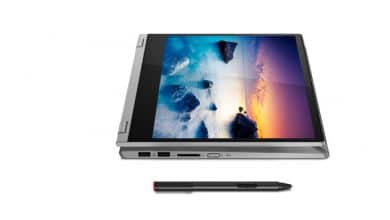 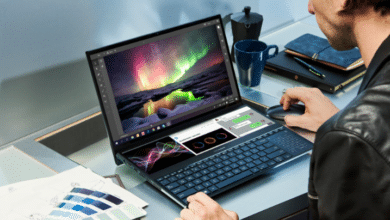