The trend towards unusual, eye-catching and effective components is continuing. Modding communities and even championships are created in which the most remarkable enclosures are chosen. In most cases, LED lighting is easy to implement as the individual components are compatible with each other in most combinations – provided the connection type is respected (and the manufacturer does not use a proprietary system such as NZXT). On the other hand, RGB hardware already has integrated LEDs, so there is no need for tedious assembly by the user. There is now an RGB version of almost every hardware on the market. Exceptions in this case are hard disks, optical drives or the cables with which RGB components are connected to the mainboard. But with the Lian Li Strimer RGB power cable for graphics cards and motherboards and the Team Group Delta RGB SSD these areas are also slowly but surely flooded with light.

The first step starts with choosing the appropriate Mainboards, which has a so-called RGB header. This serves to connect individual components to the motherboard. Newer models usually have a 3-pin header, which is only compatible with 3-pin components. Older mainboards usually have a four-pin connector. Products of both categories are not compatible with each other, as the individual pins are assigned differently. Occasionally, there are five-pin connectors whose assignment is freely programmable by software (polarity excluded). With these it is possible to control RGB LEDs as well as white LEDs. It is therefore important to clarify in advance which header is suitable. The three-pole connections for digitally addressable LED strips currently seem to be a sensible choice, as the major manufacturers ASUS, ASRock, MSI and Gigabyte more likely to use this type. The three-pole variant could therefore become a kind of standard.

With its ROG series, ASUS offers special products for players and RGB enthusiasts. For example, the ASUS ROG Strix B450-I Gaming not only accepts Ryzen 2-generation AMD processors and enables innovative overclocking and cooling options, but is even equipped with discreet lighting itself. Another highlight of some motherboards is the feature that allows the mounting of covers from 3D printing. A handful of these models can even be downloaded directly from ASUS.

While in the beginning light strips had to be attached and wired to the thin individual modules at great expense, RAM modules with integrated LEDs from almost all major manufacturers already exist today. There is no need for external cabling and the modules are controlled directly by Asus Aura Sync, MSI Mystic Light or Gigabyte RGB-Fusion. RAM is available in a number of versions.

Crucial sets at its Ballistix Tactical Tracer RGB-Series for opaque illumination with the help of a matt white plastic body whose illumination can be individually adjusted with ASUS Aura Sync, MSI Mystic Light Sync or Gigabyte RGB Fusion. There are also single-colour illuminated RAM bars, where it is possible to change the colour of the entire lighting, but not of the individual LEDs.

The most important part and heart of every gaming PC is the graphics card. In many cases, the value of this card exceeds that of the rest of the hardware. And that’s exactly why (or simply because of the brute performance of two NVIDIA GeForce RTX 2080 Ti in the NVLink network) enthusiasts want to draw attention to it.

RGB lighting is ideal for this purpose, as it allows noble components to shine in appropriate light. Here, too, MSI, ASUS and Gigabyte offer models that are specially compatible with their RGB software. In case there is space for several copies in the PC, the colour scheme and shape of the NVLink, SLI or Crossfire bridges should also be taken into account. 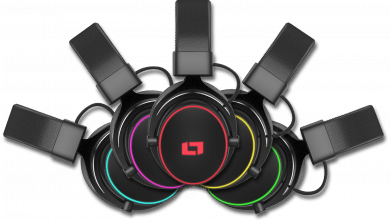 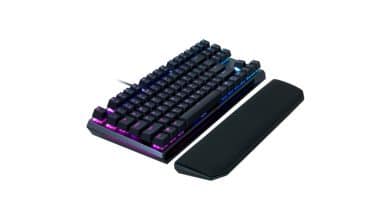