In this test we cover the beyerdynamic Custom Game. Of course, in my opinion, a good headset should not be missing from video games nowadays. For example, surround headsets are very helpful in games like Counter-Strike, because you can hear from which direction the opponent is coming. But with this test the question arises: Is expensive also equally good? You can read about this in our test report.

The beyerdynamic Custom Game comes with several items. One is the headset itself, the other is a replaceable “plate” for the ear cups and an AUX adapter for a jack connection.

The design of the beyerdynamic Custom Game appeals to me personally. The headset is an ear-enclosing model that adapts perfectly after a few minutes.  The beyerdynamic Custom Game is only available in black. On the outer ear cups there is a surface with the logo, which can be exchanged with different patterns. It comes with an Allen key and the exchangeable parts for the auricles. Unfortunately, the headset is only available in black, but it has many customization options. 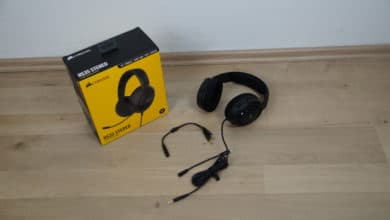