The manufacturer BitFenix released the Enso at the end of 2017. Although this case was chic, it failed many reviews due to the completely closed front and the lack of airflow. To address this problem, BitFenix released a new version a year later (December 2018). This is based on the original version, but offers a large mesh element in the front. Like its predecessor, the Enso Mesh is available in a black and a white version. Both variants are priced € 80.22.

On its own homepage, the manufacturer advertises the Enso Mesh with a stylish design, improved airflow and high hardware compatibility. Whether this midi tower can stand out from its predecessor and how it generally performs will be found out for you in this review.

The BitFenix Enso Mesh RGB comes well and safely packed in a brown cardboard box with black lettering and is wrapped in a soft polystyrene foam. In addition, the manufacturer has also stuck two protective films on the side window to protect it from scratches. The included accessories are stored in a transparent plastic bag inside the case. This bag contains all important screws, black cable ties, a mainboard speaker and an illustrated manual. 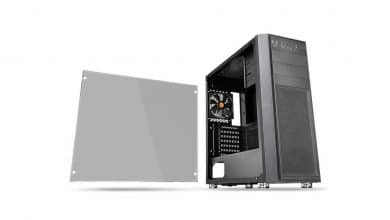