As already mentioned in the introduction, the Bitfenix Enso Mesh hardly differs in appearance from its predecessor. Only the solid front was replaced by a mesh panel. In order to clean the dust filter behind it, the magnetically attached mesh element can be pulled forward with a slight jerk. But what BitFenix has not done without with the Enso Mesh are the four narrow RGB strips that surround the front panel.

If you take a look at the lid, it becomes clear that BitFenix has optimized the Enso Mesh for airflow. The manufacturer has also equipped the lid with a grille for two 120 mm fans. In addition, a mesh dust filter was also implemented here. This is magnetic and can be easily removed for cleaning. If you prefer to close the opening, BitFenix also includes a suitable cover. Finally, the I/O panel can be found in the front area of the lid section. It has two USB 3.0 ports, headphone and microphone ports, and three buttons for power, reset, and RGB control.

The right side part of the Enso Mesh is completely closed and fastened with two knurled screws. The left side panel consists of a 4 mm thick and slightly tinted tempered glass and is connected to the body with four flat knurled screws.

If you look at the underside, you can see that BitFenix has equipped the Enso Mesh with huge plastic feet. These lift the body a good three centimetres off the floor and are provided with rubber buffers. So the power supply should have no problems to get enough air. Another positive feature is the dust filter solution for the power supply unit. This filter can be pulled out to the side and should be able to collect a lot of dust due to its fine structure.

There are no special features on the back. The power supply unit is mounted at the bottom, above it there are seven reusable PCI slot covers and the fan opening for the pre-installed fan with a frame width of 120 mm.

In principle, there is nothing to criticize about the external workmanship. The paint has no flaws and there are no sharp edges. Only the colour difference between plastic and metal and the very cheap looking closed lid cover attracted our attention.

In the interior, however, there are no differences to the BitFenix Enso. The Enso Mesh is divided into two chambers by a cover. As usual, the upper chamber holds the mainboard and the expansion cards. Three 120 mm fans or two 140 mm fans can be installed in the front of the Enso Mesh so that the inside can also benefit from the mesh front. If you also want to install a water cooling system, BitFenix has provided the cover with a cutout in the front area. Expansion cards are screwed outside the housing and the corresponding slot bezels are reusable. In addition, the mainboard tray and power supply cover have partially rubberized bushings for the power supply cables. At first glance, however, these seem to be somewhat misplaced or too small in places.

Let us now turn to the back of the interior. Here you can find various holding points for cable ties and relatively much space for cables. In addition, a total of five options for mounting hard disks can be identified here. Two 3.5″ or two 2.5″ devices can be accommodated in matching plastic frames in the riveted hard disk cage. Three additional 2.5″ SSDs can also be attached directly to the mainboard tray. Next to the hard disk cage there is the mounting position for the power supply underneath the cover. It should be emphasized here that the power supply unit will later rest on decouplers made of foam rubber.

Due to the external workmanship, BitFenix has not allowed itself any carvers inside either. The lacquering is without flaws and also here was paid attention to smooth edges.

The BitFenix Saber: A Case for RGB Lovers 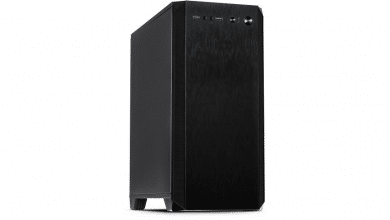