The mainboard is mounted directly on the case wall, there is no mainboard tray with opening for mounting the CPU cooler, the opening of the right side wall is not provided by Cooler Master. Spacers are not necessary for the assembly, the elevations are worked directly into the sheet metal.

At the bottom of the case we find the mounting places for either two 2.5 inch data carriers or one 2.5 inch and one 3.5 inch drive. In addition, two 2.5-inch data carriers can be mounted on a removable carrier, which can be found on the left side of the case and must be removed in order to install hardware in the case.

Although there are some brackets for cable routing, Cooler Master does not have a proper cable management with hidden cables. However, this is not necessary due to the closed housing without windows. You should lay the cables neatly to avoid disturbing the airflow through the large 200 mm fan in the front. It’s a pity that you can’t mount an additional fan behind the mesh in the lid.

We have built the following components into the case to get a feel for the space inside:

The installation is done very quickly. After opening the case on the left side and removing the SSD holder, the mainboard can be screwed in directly. Spacers are not necessary because they are already built into the sheet metal. Then we connected the cables of the case with the mainboard.

If you want to install a water cooler, you should do so now, as long as there is enough space. To do this, both the front and the front fan must be removed. The front can be easily pulled off, simply reach into the opening at the bottom and pull with a jerk. The fan can then be unscrewed to expose the screw holes for the radiator. The radiator is mounted in the interior, so it further restricts the already very limited graphics card length of 21 centimeters. If you use a water cooler, you should also think about a new front fan, ideally of course with a size of 200 mm and RGB lighting, as the built-in one only comes with a 3-pin connector and 800 revolutions per minute.

Afterwards, it is recommended to mount the hard disks at the bottom of the case, as this becomes difficult as soon as one has inserted the graphics card or another plug-in card. These are decoupled, but unfortunately cannot be mounted without tools. Directly after that the graphics card comes in.

When mounting the hardware in the Cooler Master MasterCase H100, some points must be observed.

For example, the power supply unit hangs parallel to the mainboard and thus restricts the CPU cooler height to 8.3 cm. It is also recommended to use a short power supply so that the cooler is not completely covered. It is a pity that Cooler Master does not include a mounting frame for SFX power supplies to reduce the space of the power supply.

In addition, the graphics card length is limited to 21 cm, which is further reduced by a front radiator. So here you need a mini graphics card, which limits the choice quite a bit. After all, it can go over two slots. If you mount hard disks in the ground, it shouldn’t be thicker either.

There is still a lot of unused space between the mainboard and the upper side of the case, but a fan mounting is unfortunately not planned here despite the measurement opening. Instead, the power supply blows against the closed side wall at a small distance. Overall, the construction here is rather suboptimal and the existing airflow through the large front radiator must be skillfully let through the case by clean cable management. For this there are some fixing points and cable ties.

The front fan is equipped with eight RGB LEDs that can be individually illuminated. However, this is not a digitally addressable illumination, so the fan can only light up in one colour at a time and cannot display several at the same time. It is a MasterFan MF200R RGB.

The lighting is controlled either via a four-pole RGB connection from the mainboard or via the enclosed controller. Controlling the lighting via the mainboard is of course preferable, as this gives you a much cooler choice of effects.

If you depend on the RGB controller, it is recommended to connect it to the reset button of the case, so that you can switch the colors and modes over it. Here you can choose between different static colors and a breathing color change. 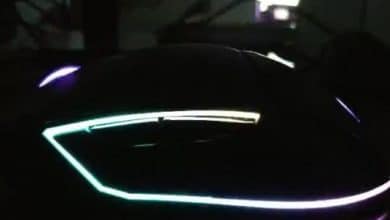