Cooler Master has introduced the new Square-Fan-(SF) fan series, specially designed for water-cooled radiators. Three models are offered for the start of the series, which according to its manufacturer should convince by a particularly simple installation.

The 120mm model MasterFan SF120R RGB is available for 15.99 Euro. There is also the 120mm model SF120R ARGB and the 360mm model MasterFan SF360R ARGB available for 49.99 Euro. Instead of individual housings, the 360 mm model of the series has all fans mounted in an all-in-one frame, which significantly reduces the mounting steps when installed on a radiator. Another all-in-one model with two fans is to follow in the future.

For decoupling, all fans are equipped with rubber rings to prevent the transmission of vibrations to the housing. The speed is controlled via the PWM signal of the motherboard. In addition to the “normal” RGB version, an ARGB version is also available, which allows the LED colors to be controlled separately and thus independently of the mainboard. Mainboards from ASUS, MSI and Asrock are also compatible with the fans, allowing you to control colors.

The fans will be officially released at the end of May, but some dealers already have some models in their assortment. 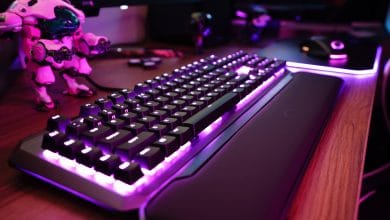