Now we come to system installation. As hardware we use a AMD Ryzen 5 1400 on a MSI B350 PC Mate with 16GB Crucial Ballistix Sport LT grey DDR4-2666. For the image output is a GTX 1060 6GB by Gigabte AORUS responsible. The power supply is done by the non-modular Berlin Pro RGB 650W with RGB fan. In order to enhance the cabling optically a little bit, single sleeved cable extensions from Phanteks.

The installation and cabling of all components went relatively smoothly. The spacers were pre-installed and there was plenty of space on the front and back. But it got a little tricky during the assembly of the power supply. This is pushed from the right side under the power supply cover and screwed in place. Although the power supply is only 140 mm deep, there were slight conflicts with the hard disk cage. Since this is not needed, however, it was simply removed.

In terms of hardware compatibility, the 220T doesn’t really stand out from the crowd, but doesn’t need to hide from the competition either. CPU coolers must not be higher than 160 millimeters and graphics cards must not be longer than 300 millimeters. The official specification of 180 millimeters for the power supply only applies if the hard disk cage is not installed. Between 14 and 21 millimetres of space are available behind the mainboard tray for cables. This did not lead to any problems despite the cable extensions used.

The three pre-installed fans are of the Corsair SP120 RGB PRO type and rotate at a maximum of 1400 revolutions per minute. Each fan has a 3-pin connector for power and a 4-pin connector for controlling the LEDs. At full speed, all fans are clearly audible from the system. The noise level is reduced to 800 revolutions per minute, making it much more pleasant and fortunately there are no background noises to be heard.

Finally, we come to the temperature measurements. For this purpose, Prime95 and Furmark were run for 15 minutes at a room temperature of 25°C and the CPUID HWMonitor was used to determine the temperature of the processor and graphics card. The test was performed once at a case fan speed of 100% PWM and once at 50% PWM.

Even with a slightly higher room temperature of 25°C and reduced fan speeds, the hardware doesn’t reach critical temperatures and the volume of the overall system remains pleasant. Since the iCUE 220T was not equipped with a rear fan ex works, you should either convert a front fan or purchase an additional fan for the rear.

The Corsair iCUE 220T comes ex works with three pre-installed Corsair SP120 RGB PRO fans. These each have eight digitally addressable RGB LEDs on the HUB and are addressed via the pre-installed RGB control. Compared to other enclosures, however, control does not work via a button on the I/O panel or a remote control, but via the iCUE software and an internal USB port. The software is free of charge and clearly structured. Although the operation was a bit tricky at the beginning, it worked without any problems after a short familiarization period. If you have other Corsair products with RGB lighting, they can also be controlled using the software.

Since the control is completely digital, many different lighting variants can be set. The interesting design of the front allows the colours to show off very well. Here are a few impressions. 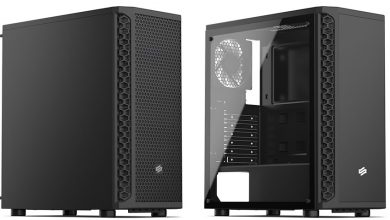