The victory is in your hands – with this sentence Corsair promotes the newest gaming mouse Ironclaw RGB of its large portfolio. With the right mouse Corsair is at least right. A good mouse is necessary to play at the front of games like League of Legends, DOTA 2 or CS:GO and obviously Corsair demands the same of their mouse. At the same time, the mouse is specially designed for gamers whose hands are simply too big for most other mice. Whether the Ironclaw RGB does not only live up to its price of about 60 €, but also the claim of Corsair itself, we have tested for you.

Like most mice, the Ironclaw RGB looks very simple at first. The first thing that catches the eye is the illuminated Corsair logo on the back of the mouse, as well as the somewhat weaker illumination below the mouse wheel. It’s easy to see that the gaming mouse is chunkier than the usual mice.

The sides are each covered with a rubberized layer and the surface is reduced to smaller squares to prevent sweating.  The mouse wheel itself is also rubberized and has curved elevations that make scrolling easier and look cool at the same time.

When the mouse is lifted, it shows that it is not unnecessarily heavy, although it is relatively large. In addition to the sensor area and the sliding surfaces, the underside offers further design elements. Under the thumb rest there is a notch, which gives the whole a little more polish. The same effect can be seen on the front. Here not only the cable comes out of the mouse, but also some notches have been made, which really make a difference as a design element.

The Ironclaw RGB not only looks good. Already after a few moments you feel a very good workmanship. Everything has its place and nothing moves uncontrolled. The Omron switches used work without any problems and the entire cover makes a good and durable impression. 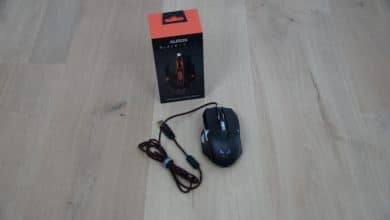