The loudspeakers are based on a combination of tweeter and mid-bass driver and can be connected either via Bluetooth or four chinch plugs (two pairs). All connections and adjustment possibilities are located on the right speaker; but by swapping the connections of the chinch connectors, the position can of course be swapped.

Edifier places all controls and connectors on the back of the speaker, which helps the look. On the other hand, you don’t have to adjust the volume directly on the front of the device: The corresponding controller is located on the back and is therefore difficult to reach. Whether or not it is necessary to adjust the volume depends on the user profile: in most cases, the required volume range can be completely covered by the software without any significant deterioration in sound quality. Ideally, the input signals should be (approximately) maximum and then brought to the required volume by the amplifier. If the input signal is not extremely reduced, however, the real sound difference is hardly perceptible.

Edifier, on the other hand, has to put up with criticism for implementing the volume setting himself: This is not done as usual by a potentiometer, but by a rotary encoder. This has a relatively large idle speed near the zero position and limits the resolution especially in the quiet range. In addition, the adjustment of the volume depends a little on the volume.

The background for using a rotary encoder instead of a potentiometer quickly becomes clear: If you press the rotary knob, the speakers change the input mode from Bluetooth to Cinch and back. As already mentioned, you have to reach behind the cabinet – for users who want to change the operating mode frequently, the loudspeakers are therefore only suitable to a limited extent.

Better is the setting of the crossover: Here a potentiometer with a pleasant rotary speed is installed, which covers a sufficiently large range. Positioning is not a problem here either, as the loudspeaker’s sound is rarely tuned to one’s own preferences.

Edifier only advertises the treble setting with an integrated adjustment, depending on which analog input you use. A second potentiometer would have been the better choice and would have covered a larger bandwidth. Finally, there is a toggle switch at the rear of the (control) loudspeaker to disconnect the loudspeakers from the mains.

In terms of sound quality, Edifier’s R1010BT loudspeakers deliver a solid result that is quite commensurate with the price. The FiiO E10K Olympus II-DAC used for control provides good detail reproduction; the speakers offer solid tuning. Of course, miracles are not to be expected: The subwoofer is missing for very strong bass, and there are also better products for treble in the higher price segment. Given the price, however, this is hardly surprising, and the loudspeakers are doing well for this.

So while the R1010BT doesn’t set new standards in a particular frequency range, it offers a good balance: the sound is warm and pleasant, many details are easy to perceive. However, the lack of adjustment possibilities for treble could have possibly helped to achieve somewhat more audible details here.

As usual with loudspeakers, the best you should do is to listen to them yourself before making a purchase decision – the opinions and selection criteria are too subjective. Who prefers a “full” sound, as it is achieved by the quite present bass, can be quite happy with the speaker system tested here. If, on the other hand, you enjoy listening to bright instruments in a more differentiated way, you might be better off with a different loudspeaker system, because the separation of the instruments is only average with the Edifier R1010BT loudspeakers.

Praiseworthy the small loudspeakers cut off in the point overdrive: When used in a room with 100m² of floor space, it was possible without any problems to provide a sound system that was not deafening but quite loud, without the reproduction quality suffering too much. Only when the bass is amplified at a very high volume does the sound quality suffer more; however, the Edifier R1010BT can definitely cope with the usual use of such small loudspeakers.

The main loudspeaker of the system houses the control module on the front, on the left between the two chassis, which probably also houses the Bluetooth receiver. This indicates which input the speakers are currently using: If the built-in LED is green, signals are received via the chinch inputs, if the LED is blue, signals are transmitted via Bluetooth. As already mentioned, the two modes can be switched via the volume control on the rear panel. 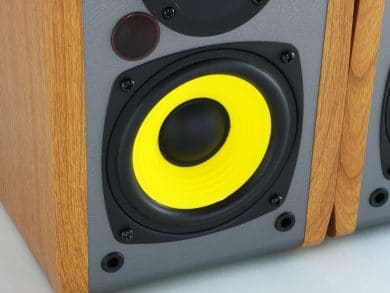 As soon as the speakers are in Bluetooth mode, they can be found as usual via a playback device under the name “EDIFIER R1010BT”. Once the connection is established, the playback functions as usual. The range is no problem in closed rooms: Even if the playback device is located in the neighboring room, the music is still played without problems.

When transmitting sound via Bluetooth, the digital-to-analog conversion takes place in the loudspeaker. The corresponding DAC does a good job: the sound reproduction is also well implemented here. Compared to our other playback devices, there is no significant coloration of the sound by the control.