The nearly closed front is equipped with several ARGB strips. But also inside the housing there are further pre-installed lighting options. Through the glass side panel, one not only has an undisturbed view of the fan installed in the rear, which is also equipped with addressable RGB LEDs, but also of a light strip on the power supply unit cover.

In addition to the RGB button, the I/O panel also has two USB 3.0 ports and two 3.5 mm jack sockets.

It is a typical midi tower that can accommodate an ATX mainboard. Coolers can be up to 15.7 cm high, which can sometimes be restrictive, but doesn’t have to be. There is no relevant restriction for graphics cards, they can be up to 37.5 cm long. There is room for up to two hard drives (2.5 or 3.5 inch) in the hard drive cage under the power supply cover. Three additional 2.5 inch disks can be screwed to the mainboard tray.

Two 120 mm fans are responsible for ventilation. The rear fan is RGB-illuminated as already mentioned, it is an Enermax SquA RGB fan. The front fan is not illuminated and is not specified further. Altogether two 140 or three 120mm fans in the front, two 120/140mm fans in the lid and the already mounted 120mm fan on the rear wall are possible. Alternatively, appropriate radiators can be used.

The Enermax Libllusion LL30 is priced at 74,90 Euro. It is already available at Alternate. 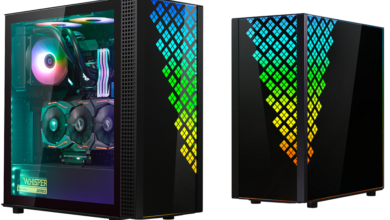