The Inside of the Case

In addition to the design, we are also interested in the technical aspect of the new housing. What is possible with the Define S2 Vision? How does it differ from its predecessor? For whom is it interesting?

It should be noted here that the vast majority of technical aspects hardly differ from those of the predecessor. With the Define S2, numerous changes have been made compared to the original Define S. The new Define S2 is the first of its kind in the world. The vulnerabilities of the original model have been revised. The leap from the Define S2 to the Define S2 Vision, on the other hand, is much smaller – perhaps also because much less time has simply passed to collect feedback and implement innovations? Maybe Fractal Design already created a great case with its predecessor, which could only be marginally improved now?

On closer inspection, however, we notice some changes that we consider to be useful. This includes the relocation of the front fan brackets to the rear. The bracket is now located behind the fans, which allows a better and more unobstructed view of the fans – which is certainly in line with the design concept.

Instead of three pre-installed Dynamic X2 fans, there are four Dynamic X2 PWM or Prima ARGB PWM fans in the Define S2 Vision, depending on the version. The RGB fans are controlled by the supplied Adjust R1 ARGB Controller, which offers eight preset colours, five levels of lighting intensity and six lighting effects. The integrated magnet allows it to be placed comfortably in the housing. The fans can simply be connected in series, so that only one connection is required on the controller. Alternatively, control can also be via compatible motherboards with addressable, digital 3-pin RGB headers. 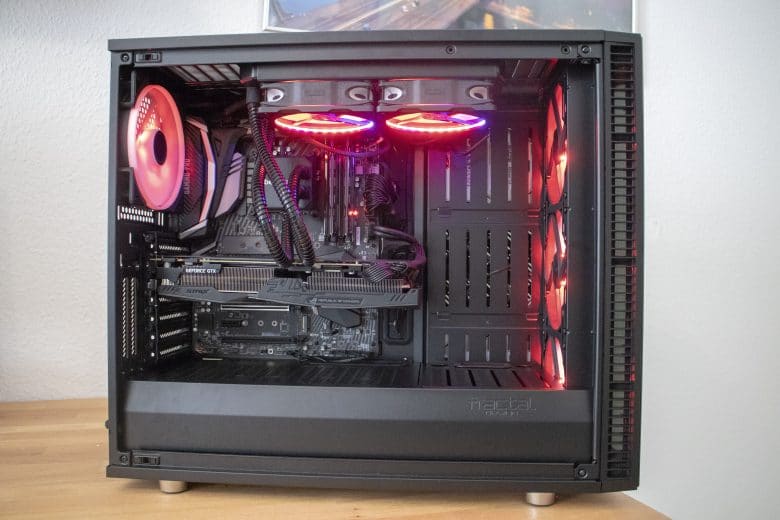 A further RGB LED strip is integrated in the glass lid of the housing. If additional fans or radiators are to be mounted in the cover for cooling, the ModoVent cover must be replaced, replacing the glass cover with mesh. The RGB LED strip will also be expanded.

We especially liked the series connection of the RGB fans with the usual 3-pin plug, which is also used on mainboards. No other connections are used. However, products from other manufacturers such as Phanteks or Lian Li can also be integrated by simply integrating them into the series connection using the adapter cable usually used for the motherboard.

In addition to the new RGB controller, a new PWM controller for fan control is also integrated. The Nexus 9P PWM fan hub now supports up to nine PWM fans, six 3-pin and three 4-pin fans as before. The controller receives the PWM signal from the mainboard and a SATA connector provides additional power. 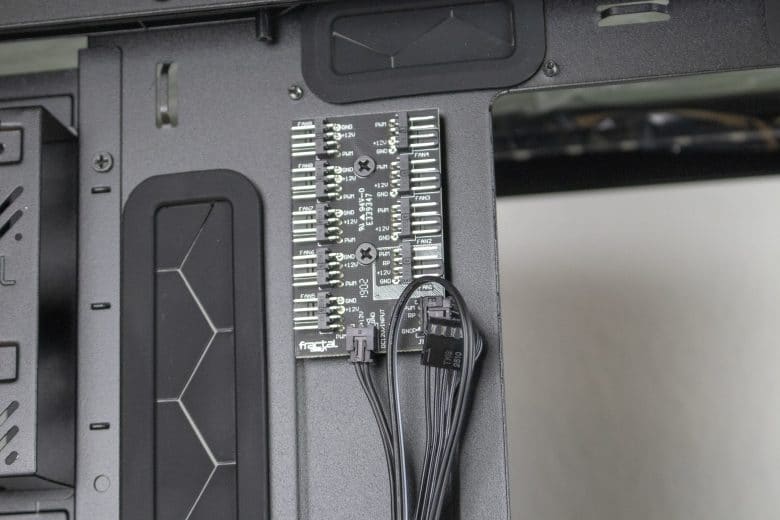 In the Define S2 Vision, the mounting places for radiators have been somewhat restricted compared to the Define S2. The lid only offers mounting places after the cover has been replaced anyway, but then also no longer for 420 mm radiators, but up to a maximum of 360/280 mm. The floor has also been restricted, 280 mm radiators are no longer possible here, the maximum is 240/140 mm.

Those were all the changes from the Define S2 Vision we noticed. Apart from that, the case of course offers many more great specifications, which the Define S2 already offered. Thus various data carriers and mainboards up to E-ATX can be installed. Both graphics cards and CPU coolers are virtually unlimited in length and height. The graphics card can also be installed vertically with a riser cable (not included).

In order to keep the dust outside the housing, dust filters can be found both on the floor and in the front. If you replace the Top Bracket and open it, a dust filter is also available here. However, due to the glass side panels, no sound insulation was required.

Rubberized cable glands can be found everywhere in the housing, which always fit particularly well at Fractal Design – other manufacturers can definitely cut themselves a slice here. Behind the mainboard tray there is 23 mm space for cable management and Velcro straps to fix the cables.

All in all, Fractal Design does not deviate from the concept of its predecessor. Furthermore, the focus is on the greatest possible space, the greatest possible freedom in the construction of the system and a certain clarity with regard to the internal design. We classify the resulting flexibility as very positive. 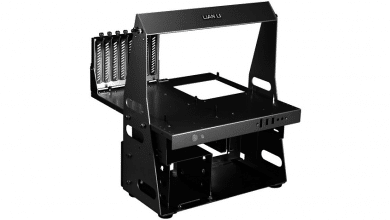 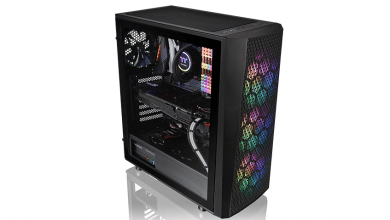