The market of case manufacturers is broad and accordingly highly competitive. Here, you have to score with unique selling points to stand out from the crowd. The manufacturer Kolink more than meets this tip with its two new cases. True to the motto “don’t spill it, but make it big” Kolink delivers an absolute showpiece with the Big Chungus. A little more understatement can be seen in the Quantum. In terms of design, the manufacturer relies on a combination of discreet RGB lighting and mesh strips.

If you want to get a real eye-catcher into your home gaming setup with the Big Chungus, you’ll have to dig deep into your pocket. The case costs a proud 230 euros. But the buyer is also offered a few special features. The most striking is surely the untypical shape of the case. It’s not only half-open, but also trapezoidal. This has a great optical effect. If you place it at an angle, it looks as if the tower is leaning back.

Of course, it is not easy to take over the classic layout of a midi tower into a trapezoidal shape. Therefore Kolink had to make some changes to the layout. The location of the power supply is unchanged. This finds place at the bottom of the case. More precisely, it is placed in the red aluminium base of the case. Above it are the three fans, which provide for sufficient air circulation in the system.

The HDDs are located behind the mainboard tray. They can also be installed on the mainboard tray itself. In total, the Big Chungus offers space for up to four HDDs. However, a maximum of two of these may be in 3.5 inch format. However, these are the only restrictions. For components like graphics card, cooler or power supply Kolink has no restrictions at all.

Due to the trapezoidal shape Kolink had to take into account a number of factors when ventilating the system. First and foremost, the distribution of the installed fans is different. While a normal system has two to three fans behind the front, the Big Chungus has four fans behind the front. The other fans can be installed on the bottom (3 pcs.) as well as the lid (2 pcs.). Heat exchangers in 360 mm format can be installed both at the front and the bottom of the case.

Five fans are already included with the Big Chungus. Kolink also provides the buyer with the appropriate LED lighting. Fans and the lighting can be controlled in different ways. A suitable infrared remote control is included in the scope of delivery of the case. Alternatively a control can be done by a suitable mainboard (3-Pin-5VDG-connector).

The Quantum is the absolute opposite of the Big Changus. Here Kolink uses the look of a classic Midi-Tower. Accordingly, the price is much more inconspicuous than the showcase model. The Quantum can be purchased for just about 55 Euros. But the Quantum is not just a disdainful midi tower. It knows how to stand out from its competitors with its design. It offers a flared front that attracts attention due to a striking mesh stripe.

Unlike Big Chungus, Kolink does not have to experiment with the layout. As usual with a midi tower, both power supply and hard disk cage are located under one panel. On the back of the mainboard the Quantum offers space for two more HDDs. Kolink doesn’t make any demands on the choice of the graphics card for the Quantum either. Only the dimensions of the processor cooler have to be taken care of. These must not be higher than 15.5 cm. This is due to the small width of the Midi Tower.

In order to provide the components with enough fresh air, Kolink gave the Quantum an illuminated fan at the rear. The corresponding lighting effects can be controlled either via the mainboard or directly via the I/O panel. If you want to install more fans you can do this on the lid and front. There is space for four 120 mm or 140 mm fans. A radiator with a diameter of 240 mm can be installed at the front. However, the radiators must not be too wide. Otherwise one must fear a collision with the cover of the power supply. 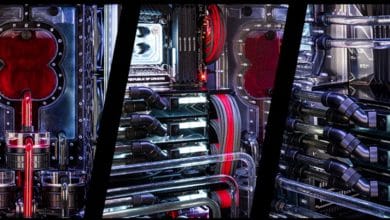