Now we come to system installation. As hardware we use a AMD Ryzen 5 1400 on a MSI B350 PC Mate with 16GB Crucial Ballistix Sport LT grey DDR4-2666. The Ryzen is cooled by an EKL Alpenföhn Matterhorn Pure. For the image output a GTX 1060 6GB of Gigabte AORUS is responsible. The power supply does the non-modular Berlin Pro RGB 650W with RGB fan. In order to enhance the cabling optically a little bit, single sleeved cable extensions from Phanteks.

As in Kolink Levante, the installation of all components in the refine was very easy and fast. Due to the well positioned and dimensioned cable management openings and the 20 millimeters behind the mainboard tray all cables could be laid properly. In general, the space conditions in the Kolink Refine are quite ample anyway. For CPU coolers, a maximum of 160 millimeters of space are available. This is sufficient for many powerful coolers. But the buyer doesn’t have to worry at all about the length of the graphics card. With a maximum possible length of 380 millimeters, every pixel accelerator should fit into the refine.

The assembly of the data carriers requires the use of a screwdriver in all cases. Large 3.5″ hard drives are accommodated in the HDD cage at the front of the case. For mounting, the HDD is first equipped with two special rail screws on the left side and then pushed into the slot. Then the data carrier is fixed with a knurled screw on the right side. Two SSDs can be attached to a steel plate behind the mainboard tray with four normal screws each. Unfortunately there is no decoupling.

The pre-installed case fan has a frame width of 120 millimetres and rotates at a maximum of 1300 revolutions per minute. It is connected directly to the mainboard via a black 3-pin connector. At full speed, the fan is audible, but not disturbing.

In comparison to the Kolink Horizon or Levante, the manufacturer also dispenses with RGB fans for the Refine RGB and uses an attractive RGB element in the front. This was hidden on the back of the front panel and discreetly illuminates the fan openings in the front and the interior. By using a 3-pin 5V RGB connector, the RGB strip can be addressed digitally via the mainboard. If the mainboard does not have such a connector, there is a switch on the I/O panel and the RGB element can be powered via an old-fashioned Molex plug. The switch in the I/O panel cannot be used to switch the RGBs. Kolink has added another switch to the bottom of the front panel.

Finally we’ll give you some impressions how the lighting looks like in action. 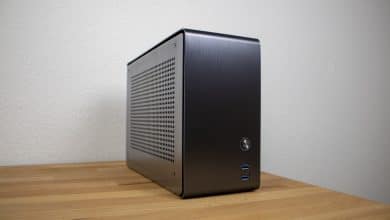