Just in time for this year’s Consumer Electronic Show (CES) Lian Li presents new products. These should not only convince in terms of performance. This year, the Taiwanese manufacturer of cases and power supplies is clearly focusing on the visual appearance.

The case and PC accessories expert from the Far East wants to “impress” both competitors and customers with his new products. It is questionable whether this will succeed with the optically unspectacular O11D Mini case. After all, Lian Li presents nothing else here but a somewhat more compact O11 Dynamic. Here, the volume of the O11 Dynamic was almost halved. In the O11D Mini it will be possible to use both Mini-ITX and Mini-ATX motherboards.

The cube-shaped O11D Mini should be able to be redesigned at the back. The comparatively small space available won’t have too much effect on the user. Those who choose the O11D Mini will have a small mainboard anyway. This has the positive side effect that unusable slot bezels are simply omitted. Thus, larger or more radiators can be installed inside the small PC cube. However, this information is still to a certain extent speculative. Lian Li still reserves exact specifications.

New towers of the Lancool series

The popular Tower series by Lian Li has changed visually. The Lancool II has been given a refreshed front. Here the buyer also has the choice of a version with air-permeable mesh material. In contrast to the standard version, this should ensure more effective air circulation.

Besides the Lancool II, Lian Li also introduces the Lancool 315. This makes it clear at first glance that it is very much oriented towards the NZXT H510, both externally and conceptually. The user has the possibility to remove the mainboard tray. The Lancool 315 offers two panel options on the front. You can choose between the materials glass and mesh. The Lancool 315 plays it safe in the segment for power supply and hard drives. This remains isolated from the rest in both the mesh and glass version.

Last year, Lian Li caused quite a stir with a university fan. Last year’s prototype went into production within a year. RGB fans were installed, which should convince both visually and in terms of performance. It is possible to connect the individual RGB fans in series. A prerequisite for this is, of course, that they are mounted directly next to each other. As a result, the user is able to operate several fans with only one cable.

Lian Li also presented a 24-pin ATX power cable. This cable is a revised version of the well-known “Strimer”. The “Strimer Plus” has got an extended illumination with 120 LEDs in total. The corresponding LEDs provide an even illumination of the cable. This is made possible by placing the light sources under a uniform silicone cover. When and at what price the new products of the Taiwanese manufacturer will reach our market is still unknown. 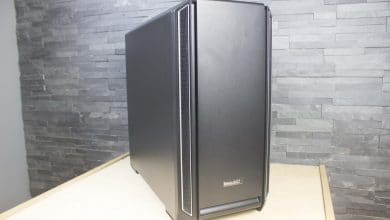 be quiet! Silent Base 601 Case Review