With the VIGOR GK30, MSI launches a gaming keyboard that is available as the VIGOR GK30 Combo as a gaming bundle with the CLUTCH GM11 gaming mouse. We test both for you, the mouse test can be found here.

The VIGOR GK30 keyboard has so-called plunger switches, i.e. mechanical membrane switches. These are three-part keys that provide a mechanical typing feel and are designed to withstand up to 12 million keystrokes.

The VIGOR GK30 is definitely visually appealing. Its simple design is suitable for everyone. Although the keyboard has RGB lighting, the keys themselves are not individually equipped with LEDs. Rather, it is a backlight. What is completely missing is the palm rest.

Although the GK30 is completely made of plastic, it doesn’t feel cheap. The high weight also contributes to this. The keys in particular feel high-quality. The plunger switches ensure that the keys are firmly seated and have virtually no play.

The display for active Numpad or Capslock is typically arranged above the Numpad. But since the VIGOR GK30 has high keys, the view is obscured if the keyboard is not directly in front of you.

Also the feet are of high quality. The fact that the feet are opened to the side should be emphasized. If these are cheaply processed and are folded back as normal, this often happens by itself.

Keys and other Features

As already mentioned, the VIGOR GK30 uses so-called plunger switches. A mechanical typing feeling is not achieved, especially since the tactile feedback is missing. They are designed for 12 million clicks, classic membrane keyboards hold about 5 million. Multimedia keys are sought in vain, but some of the keys are doubly assigned with additional functions. The keys are nevertheless suitable for frequent typists, as they have a clear touch and can be operated without much effort.

The multimedia functions are controlled via the function key and the keys F9 to F12, as well as print, scroll and pause. The arrow keys are used to control the LEDs. They control brightness and color. Further functions for controlling the LEDs are assigned to the Insert, Remove, Position 1 and End keys.

There are no other features to be emphasised. No USB passthrough and no cable routing for the keyboard cable.

With the MSI Dragon Center, the keyboard can be customized via software. Due to the needy equipment we do not find many adjustment possibilities in the software. Although three different profiles can be managed, as only the lighting can be adjusted, they are quite superfluous.

RGB lighting can also be controlled and adjusted using the function keys. Even if there are no dedicated macro keys, freely configurable keys could have been used.

The plunger switches know how to please. They don’t get close to the typing feel of real mechanical switches, but they react just as quickly. But the height of the keys can cause problems, because they like to hide the view of the display for the activated Numpad or Caps Lock.

A non-existent palm rest for high keys can also cause problems. Due to the good angle to the hand, longer sessions are also possible without problems. The RGB lighting is a nice feature, but unfortunately it cannot be adjusted too much.

In general, the MSI VIGOR GK30 is a solid keyboard. With its plunger switches, it offers a good typing feel and promises a long service life. 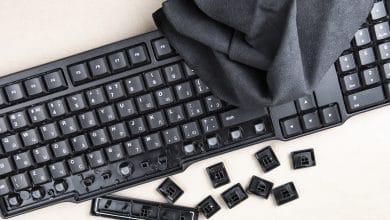 How Can I Clean My Keyboard?