Due to the small dimensions of the Ophion it makes sense to have a look at the operating instructions. This contains a possible installation sequence in which as few complications as possible occur. A little note at this point: Raijintek recommends to install the power supply first and then the mainboard. This is also a sensible sequence, unless the I/O panel of the motherboard contains protruding elements such as the threads of WLAN antennas. In this case you should mount the mainboard first, so that you don’t scratch the power supply during installation. 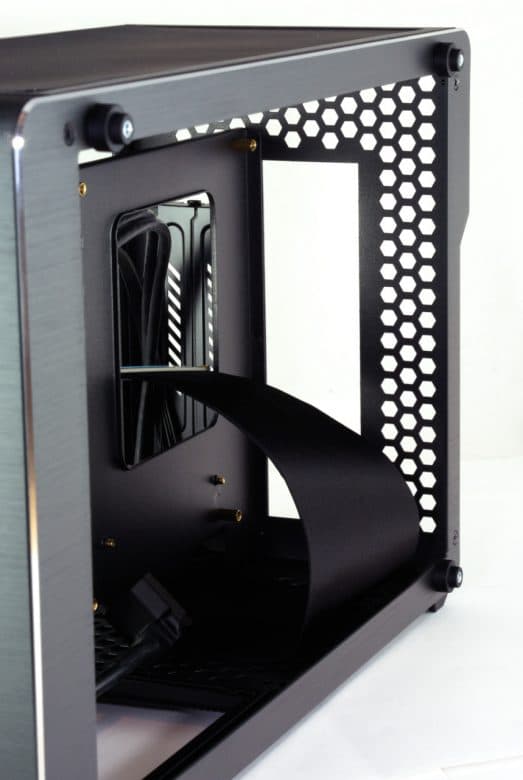 Otherwise, the system construction in the Raijintek Ophion is not a great difficulty: all mounting systems are self-explanatory and function well. The greatest amount of work is involved in the cabling, which is why it should be well planned. A power supply with cable management is mandatory, and ideally power cables should be used that really only have the required connections. Who can do without a storage drive has it particularly easily, then both the power cable and the data cable can be omitted.

Optionally you can place extra long cables behind the front and keep them out of the airflow. This works even if a drive is installed behind the front. For this you should consider that an angled power plug is necessary. There are corresponding adapters in the network.

There is a small special feature with the power supply: It is not mentioned in the manual, but the fourth screw for the power supply is hidden under the stand. This is held by a screw on the housing, which can be loosened problem-free. The power supply unit can then be screwed tight.

On the cooling side, the Raijintek Ophion is only convincing to a limited extent. The test system used is very similar to the one we used in our test of the even smaller Kolink Rocket, where the processor temperatures are significantly lower.

The temperature results should take into account that the Ryzen 5 2400G is not a processor that is easy to cool: Although the processor’s consumption is not particularly high – in our CPU load test, the system consumes around 80 watts when loaded with Prime95 Small FFTs – the CPU’s heatspreader is not soldered. This leads to higher temperatures from the start, so that a stronger Ryzen processor, which is soldered for this purpose, can possibly also be cooled with the boxed cooler.

The situation is similar with the graphics card, which can only be cooled to a limited extent. The R9 380 Nitro we used increases the system consumption to a good 250 watts, which have to be almost completely discharged via the graphics card cooler. When loaded with Furmark, the fan changes to the highest speed after a few minutes and can only maintain the temperature at 93°C in this way.

It should also be remembered that the R9 380 Nitro used is by no means easy to cool: today there are high-end models with the same or lower fuel consumption, and it would also be possible to use a more powerful radiator. Users shouldn’t be afraid of the surcharge for a better custom design, but those who buy a case with a glass window shouldn’t object to a triple fan cooler anyway. Alternatively, it is possible to use a radial cooler, which under these circumstances probably has considerably fewer problems than an axial system. You should not overclock a (air-cooled) graphics card in any case, instead you should consider to relieve the cooling system with Undervolting.

As our test shows, a single case fan already significantly improves the situation and, as recommended by Raijintek, should expel the air at the top. So buyers should definitely plan at least one case fan, another one in the bottom (maximum 15 millimeters thick!) should further reduce the temperature. However, one of the basic problems of the Raijintek Ophion is not solved by the case fans: the glass pane.

As can be seen in the table, the temperature drops significantly as soon as you remove it. That’s hardly surprising, since the CPU cooler and the graphics card suck their air from exactly this direction. Here you can feel the only disadvantage of Raijintek’s decision to use two glass windows ex works. These are visually eye-catching, but for a cool and quiet system it would be better if at least one of the side parts had air outlets. Users with performance-hungry systems should therefore also plan for the additional aluminium side panels. Of course, the Raijintek Ophion Evo should look quite different: If you cool your processor and graphics card with a 240 radiator in the lid, you shouldn’t have any problems with hot-headed systems.