More and more manufacturers of gaming headsets are focusing on the e-sports market. Now Razer is once again launching a pair of headphones that wants nothing less than to meet the highest demands. In addition to high-quality THX Spatial Audio, individualized gaming profiles are also to ensure this. According to Razer, this not only makes it easier to locate opponents, but also improves immersion in general.

Reissue of the BlackShark

When the original BlackShark saw the light of day in 2012, it already enjoyed great popularity with release. So it was only a matter of time before the popular headset was given an updated version. The focus of Razer is again on the field of e-sports. In order to convince even more than the first version of the headset, some points have been improved in terms of technology.

Razer obviously focused on sound when designing the BlackShark 2. In particular, the manufacturer has given its new headset a completely new engine that focuses on surround sound. This is THX Spatial Audio. But beyond that, the new headset allows the creation of so-called Game Profiles. This makes it easier to track down opponents and improves the overall gaming experience.

For the BlackShark 2, Razer developed a completely new 50mm driver. The headset also offers improved passive noise cancelling in addition to the already mentioned THX Spatial Audio. Since a suitable microphone is also needed for smooth communication, the experts at Razer also improved it. This scores not only because it is low-noise, but also because you can pick up the microphone.

Razer installs the TriForce Titanium driver with 50 mm size in the BlackShark V2. According to the manufacturer, this driver is supposed to provide a “high-end audio performance”. Razer achieves this by dividing the driver into three different areas. Thus, the driver concentrates equally on lows, highs and mids. As each sound direction benefits from a separate section, a crystal clear sound should ultimately be created.

Razer is obviously particularly proud of the implementation of THX Spatial Audio. After all, this is supposed to effectively improve the gaming experience. The profiles used here have been specially certified by game developers. As soon as a suitable game is recognized by the headset, you have the choice between different profiles. In addition to the classic options such as stereo, game or movie, you can also choose between THX tournament mode or the THX environment mode. While the tournament mode is used to locate the opponent, the environment mode is intended to improve the immersion. The sound settings can be adjusted in the Synapse 3 software. When released, already 18 games should be able to support the two new modes.

The HyperClear Cardioid Mic should live up to its name. The focus is on the crystal clear output of speech. This should enable the best possible communication. Furthermore, the microphone of the BlackShark V2 can be conveniently removed. Outside of multiplayer games you can only enjoy the sound of the headset. You can use the Synapse 3 software from Razer to make detailed settings on the headset. In addition to the suppression of disturbing ambient noise, the software can also improve the voice quality. An equalizer is of course also on board. This allows everyone to put together their own optimal sound.

Since one or two gaming sessions can be longer, comfort when wearing a headset is essential. Accordingly, Razer uses ear pads made of memory foam for the BlackShark V2. This is not only breathable, but should also feel very pleasant on the ears. To avoid neck pain, Razer has tried to make its new headset as light as possible. At 262 grams, the BlackShark V2 is anything but a heavyweight.

The new headset from Razer is now available. You can get the BlackShark V2 at a price of just 110 Euro. Parallel to the “Premium-Version” comes a slightly slimmed down version. The BlackShark V2 X offers a little less features, but costs only just 70 Euro. 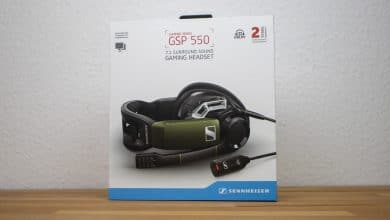