The name “Redmi” once stood for the low-budget devices of the Chinese Xiaomi Group. But at the beginning of this year, Redmi was spun off as a separate brand.

Now the first smartphone of the young brand was introduced: The Redmi Note 7.

Like the Xiaomi Mi Play, the Redmi Note 7 also has a so-called “Waterdrop Notch”, which contains a 13 MP strong front camera. This supports HDR as well as Bokeh mode.

In line with current trends, the back is made of glass. There is a fingerprint sensor. Two cameras protrude from the housing. Of course, the Redmi Note 7 also has an LED flash.

One of the smartphone’s highly praised features is the main camera. It has a Samsung Isocell GM1 sensor and has a resolution of 48 MP (f/1.8). This sensor supports pixel binning. With this technology, four pixels are always added together for poorly exposed photos in order to improve image quality.

The other camera on the back serves the depth of field that is used in Bokeh mode. It only needs 5 MP and a f/2.4 aperture.

The Note 7 is powered by a Qualcomm Snapdragon 660. This consists of 8 cryo-260 cores, which are divided into two clusters. Four cores clock with 2.2 GHz each, the other four with 1.8 GHz each. The Adreno 512 takes care of the graphic calculations.

It is interesting that the Snapdragon 660 only supports a maximum camera resolution of 25 MP according to the manufacturer. So the question arises how Redmi could integrate a 48 MP sensor into the device.

The Snapdragon 660 is joined by either 3, 4 or even 6 GB of LPDDR4 RAM. The smallest capacity is only available in connection with 32 GB internal memory, otherwise 64 GB are used.

Redmi provides the battery with a generous 4,000 mAh. For the first time with a Redmi device it can be charged via USB Type C. Quick Charge 4.0 is supported, but requires the purchase of a separate charger.

Fortunately, the manufacturer does not save the 3.5 mm jack connection. It is located at the top of the device.

Bluetooth 5.0 and a hybrid SIM slot are also included in the Note 7’s connectivity. It accepts either two nano SIM cards or one SIM + one micro SD card. Unfortunately NFC is not on board.

The phone measures approx. 15.9 by 7.5 cm and is 8 mm thick, with the rear camera array protruding slightly from the housing. It weighs in at 186 grams.

If you would like to own a colourful smartphone, you can choose either a blue or pink colour. Otherwise, the grade 7 is also available in black.

The operating system MIUI 10 is based on Android 9.0 and was extensively adapted by Xiaomi.

The first available International version of Note 7 is adapted for the Chinese market. Thus the German language is also missing in MIUI beside LTE volume 20. In addition, no Google apps, such as the Play Store, were installed.

Interested parties should therefore wait for the Global Version, which will probably be available in a few months. It comes with volume 20, German MIUI interface and pre-installed Google apps.

If you still want to get your hands on a device as early as possible, you can stop by at China exporters. First dealers already list the Redmi Note 7.

In China, the 3/32 GB version will be available in (virtual) shops at a price of only 999 Yuan (approx. 128 €). One can assume however that the importers and/or the dealers resident here in Germany (should the device become available in Germany) will slighlty increase the price.

What do you think? Cannibalizes Xiaomi with the Redmi Note 7 his recently introduced Mi Play? Write your opinion in the comments! 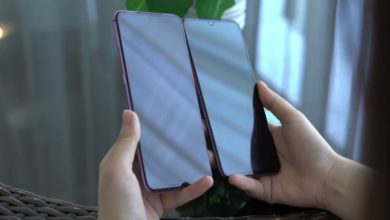 Oppo and Xiaomi Present Smartphones with Front Camera Under the Display