In terms of performance, we need to differentiate a little. If we first take a closer look at the radiator, it is particularly noticeable that the lamella density is relatively low. This means that the radiator works very well with slowly rotating fans due to its low air resistance, but in reverse, less heat can be emitted than with radiators with high lamella density and correspondingly strong and good fans.

The header used in the test system Intel i7-8700K Processor comes with the Rajintek Orcus RGB at 26°C idle and 59°C under load with Prime95. The temperatures can be seen and leave air for overclocking. The fans were not running at full speed.

This leads us directly to the included fans, which according to Raijintek work in a speed range between 800 and 1,800 rpm. During operation, however, the fans are not unmistakable. Sometimes we even have the impression that the background noise changes more often, even if the load on the system has not changed. An interesting alternative is Core version of the Raijintek Orcus that comes without any fans. This allows the user to select the fans and explicitly opt for models that have been optimized for radiators. This allows much better cooling and less noise at the end of the day.

Raijintek has once again put a lot of effort into lighting the Orcus, because in addition to the three 120 mm fans included, the flow meter in the heat sink can also be illuminated in colour. Fan and heat sink are connected via LED cable to the enclosed hub. This in turn can be controlled directly via a mainboard with RGB LED connection or the wireless remote control.

The adjustment possibilities of the LED lighting are very extensive. The lighting can be programmed to different colours and effects using the remote control. For a detailed overview of the possibilities we recommend to take a look at the manufacturer’s page. 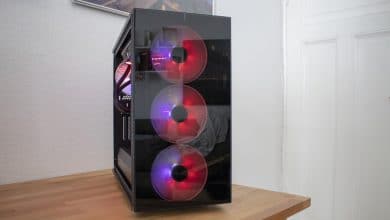