In addition to the Samsung Galaxy Note 10 Smartphones, the South Korean company also presented the Samsung Galaxy Book S during the presentation. The ultra-slim notebook will also be launched in Germany, where Samsung has not offered any notebooks since 2014. With a battery life of up to 24 hours and a weight of less than 1000 grams, the Samsung notebook competes with Microsoft’s Surface series, among others, although the two companies recently announced a closer cooperation.

The display of the Samsung Galaxy Book S offers a 13.3-inch diagonal with Full HD resolution (1,920 x 1,080 pixels), over which a 720p webcam is integrated in the narrow frame. To achieve the 24-hour battery life that comes with a 42-watt battery, Samsung relies on the Qualcomm Snapdragon 8cx chip, which is extremely power efficient compared to Intel or AMD processors. The eight-core CPU with up to 2.84 GHz is designed for always-on use. The Galaxy Book S has an X-24 LTE modem from Qualcomm that supports a maximum of LTE to Cat.18 with up to 1.2 GBit/s in download and upload so that it is always connected to the Internet, even when mobile.

The other components show that the Galaxy Book S is a notebook that was mainly developed for office use. The passively cooled device has 8 GB RAM (LPDDR4X-RAM) and an SSD with 256 GB or 512 GB capacity. The storage capacity can be expanded to a maximum of 1 TB via a micro SD card. External devices are connected via two USB-C ports, one of which must be used for loading. Bluetooth 5, a fingerprint sensor and Windows Hello are also available.

Depending on the equipment variant and region, Windows 10 Home or Pro is used as the operating system. The smallest version costs 1,099 Euro. An official release date was not mentioned during the presentation, a launch between September and October is realistic. The Galaxy Book S in the colours “Earthy Gold” and “Mercury Gray” will be launched on the market. 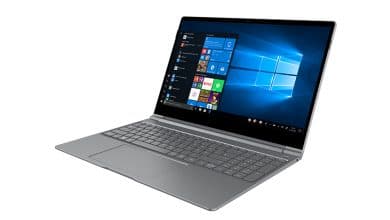