A few days before the start of this year’s Mobile World Congress (MWC) in Barcelona, Samsung presented two new tablets.

According to the South Korean company, the Samsung Galaxy Tab S5e is probably the lightest 10-inch tablet in the world, weighing only 400 grams. With its case just 5.5 mm thick, the tablet is even thinner than the Apple iPad Pro, which is 5.9 mm thick. Samsung achieved this with an aluminum case that houses the 10.1-inch OLED display with a resolution of 2,560 x 1,600 pixels. The 7,040 mAh battery enables a maximum service life of 14.5 hours. Fastcharging technology recharges the battery in just 190 minutes, POGO charging takes 290 minutes.

Samsung’s name extension e stands for ‘essential‘, a comparatively inexpensive basic version that will also be available for the new Galaxy S10 models. Nevertheless, the other components of the tablet are also convincing. Instead of an Exynos processor developed in-house, Samsung uses the Qualcomm Snapdragon 670 with eight cores, which can access four GB of RAM. The internal memory has a size of 64 GByte, the capacity can be increased by a maximum of 512 GByte using a micro SD card. In addition, the tablet should convince with good sound, which Samsung realizes with the help of the four loudspeakers developed by AKG. Depending on the orientation of the tablet, the setting of the Dolby-Atmos certified loudspeakers adjusts automatically. The login to the Galaxy Tab S5e is done via the fingerprint sensor integrated in the home button.

In the standard version, the tablet has WLAN (AC standard), Bluetooth 5 and USB 3.1 type C as well as GPS and a 13 megapixel camera and a front camera with 8 megapixels. A version of the tablet with LTE module is also available. The device is offered by Samsung with WLAN for 419 euros in the colors black, gold and silver. The version with LTE modem is available in the same colours for 479 Euro.

The more affordable Samsung Galaxy Tab A 10.1 (2019) offers solid entry-level equipment for users with low demands. The original version of the tablet for the year 2016 is still the most popular tablet in Germany, with around one million units sold. Samsung has thoroughly updated the tablet to keep it that way in the future.

The 10.1-inch display has a resolution of 1,920 x 1,200 pixels. Instead of an OLED display, Samsung uses an LED panel whose colors and contrasts cannot compete with the Galaxy Tab S5e. But the 7.5 mm thick case of the Galaxy Tab A 10.1 made of aluminum with its weight of 460 grams is convincing.

The Exynos 7904 processor developed by Samsung belongs to the lower middle class. Also the 2 GByte RAM should quickly reach its limits in demanding applications. The 32 GByte internal memory can also be expanded using a micro SD card.

The basic equipment with WLAN is offered in black, silver and gold for 209 Euro, with LTE modem the Galaxy Tab A 10.1 costs 269 Euro. The tablet doesn’t offer a fingerprint sensor, instead it is unlocked by facial recognition via the 5 megapixel front camera. The equipment is supplemented with an 8 megapixel main camera and a stereo loudspeaker with Dolby Atmos certification.

Both tablets are available from 5 April in Germany. The operating system used is Android 9.0 Pie, which complements Samsung with its own One UI user interface. 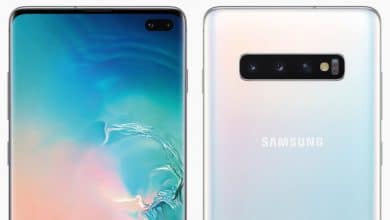