In addition to the new Dell Latitude 9510 and Dell XPS 13 (9300) notebooks, six monitors for all needs were also presented in the run-up to the Consumer Electronics Show (CES).

The successor of the Alienware AW2518H offers a diagonal of 25 inches, 240 Hz and 1,920 x 1,080 pixel resolution (Full-HD). The Alienware AW2521HF now has an IPS panel instead of a TN panel, which has better color values and still delivers optional gaming performance with its reaction time of 1 ms. G-Sync and FreeSync are also supported.

According to Dell, the monitor should be optimally suited for ambitious gamers who can position their keyboard especially close to the display thanks to the stand, which gets flatter towards the front. Dell also speaks of a “unique cooling and ventilation design”. Whether active cooling is meant by this is not yet known. Aside from two USB sockets and a headphone jack in the middle of the lower display bezel, the Alienware AW2521HF monitor has the freely adjustable ambient light AlienFX as well as special gaming functions like an FPS overlay. The gaming monitor will be available in the USA from March 11th for $499.99.

The new Dell UltraSharp U4320Q with a 42.5 inch screen diagonal (108 cm) is aimed at professional users who can display several programs in parallel thanks to the resolution of 3,840 x 2,160 pixels. Gamers, on the other hand, will be disappointed by the 5 ms response time and the refresh rate of only 60 Hz.

The Picture-in-Picture function supports up to four image sources in parallel. Windows can be aligned thanks to the Dell Display Manager. The Auto-Restore function will then ensure that the previous positions are automatically restored in the future.

The business orientation is additionally underlined by the two USB-C ports, one of which supplies notebooks with up to 90 watts. There are also two DisplayPort 1.4, one HDMI 2.0 and three USB-A ports. The Dell UltraSharp U4320Q will be launched at the end of January for $1,049.99. Included in the price is an extended warranty that guarantees a replacement device on the next business day.

Designers, photographers and other users for whom accurate colour reproduction is critical can look forward to the new Dell UltraSharp U2720Q monitor, which comes with a Delta E <2 colour gamut. The 27-inch IPS panel with 3,840 × 2,160 pixel resolution (UHD) offers 10-bit colour depth and covers 95 percent of the DCI-P3 colour space. The contrast of 1,300:1 is also relatively high compared to other IPS displays. The brightness of up to 350 cd/m², on the other hand, is on a par with that of the competition.

As with the Dell UltraSharp U4320Q, the Dell UltraSharp U2720Q monitor also has a USB-C port with 90 watts of power to supply notebooks. The equipment is rounded off by a DisplayPort 1.4, HDMI 2.0, a 3.5 mm jack plug and USB-A connections. A pivot function is also integrated in the stand for editing large documents.

In the USA, the monitor will be available from 30 January for 710 dollars. Compared to professional monitors for graphic artists and photographers, the device is thus comparatively inexpensive.

Thanks to the display port output, multiple Dell UltraSharp U2520D monitors can be connected in series via a so-called “daisy chain” using just one DisplayPort. The release is also scheduled for the end of January. The introductory price in the USA is 480 dollars.

On the other hand, users looking for an affordable office monitor should take a closer look at the latest offshoot of the E-series. The Dell E2720HS with a 27 inch IPS panel, 1,920 x 1,080 pixel resolution (FullHD) and 60 Hz refresh rate offers a significantly lower brightness and poorer color values in comparison to the other new introductions. Dell has also done without a DisplayPort and the pivot function. Picture sources via HDMI 1.4 and VGA are connected. USB ports or sound outputs are also missing in return.

Something out of the series of new introductions dances the Dell 86 inch Dell C8621QT. This is an interactive touchscreen without a stand that can be used for example during presentations or meetings and which, thanks to its size, also allows input from several users at the same time. The IPS panel has a resolution of 3,840 × 2,160 pixels (4K).

The monitor detects a maximum of 20 touch points simultaneously. Included in the delivery is a stylus, which is magnetically held to the display frame. A coating is supposed to prevent reflections and fingerprints according to Dell. Aside from a USB-C port (90 watt power delivery), there are still several connections like RJ45, HDMI CEC and RS232 as well as four HDMI and DisplayPort.

The price of the monitor, which will be released in the USA on April 10th, is not yet known. 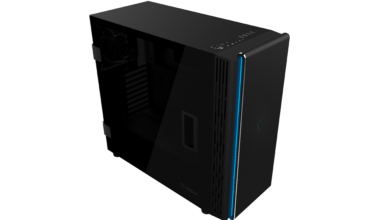