In the search for a new monitor you have to make many decisions at the present time. In addition to resolution, response time and frequency, ergonomics, technology and image quality also come up, where there are many small and large differences.

For passionate gamers, FHD is slowly becoming too little and even a frequency of 60 Hertz is usually no longer sufficient. So you look for a WQHD monitor (2,560 x 1,440 pixels) with 100 Hertz or even more. Since the devices with IPS panels are usually the higher quality, but also more expensive devices, the choice is limited. However, the LG UltraGear 27GL850-B stands out somehow, as the price seems relatively low and the advertised features are by far not always offered. Therefore the question arises: isn’t this monitor from LG “UltraGear” only by name or is it worth taking a closer look at the device? We followed this question and want to answer it for you in this test.

After opening the box, you will see the stand, which consists of two parts, as well as a box with all the accessories. Everything is embedded in the polystyrene in such a way that it is solid for transport. Under the first polystyrene plate is then well packed the actual display. The accessories include the power cable and the external power supply as well as a lot more. An HDMI and a DisplayPort cable are included for image transmission, so that all functions can be used without buying an additional cable. A USB 3.0 cable is also included to use the two additional USB ports on the monitor. Another nice feature is the cable holder, which can optionally be mounted on the stand.

Mounting the monitor cannot be made easier. The two parts of the stand are inserted into each other and then fastened with a screw. This is done completely without tools. The display itself is then placed at an angle on the holder. When the display is tilted downwards, it snaps into place and the assembly is complete. To remove the display, simply press a button so that the display can be lifted off again. 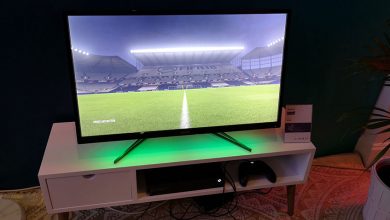 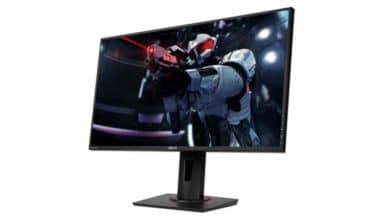