The workmanship is not necessarily the very best. However, in the field of ultra-light mice this is rarely to be avoided. This is due to the weight of high-quality materials. Since ultra-light mice have to concentrate on the essentials, there is simply no room for “unnecessary” components. While the quality of the mouse itself makes an average impression, the cable is convincing in any case. Thanks to the high-quality textile cover, the mouse cable slides smoothly over the mouse pad and did not disturb at any time during the test.

With the Light² 200, Sharkoon obviously concentrates on the essential. The equipment is correspondingly slim. Instead of many different buttons, the ultra-light mouse offers just six buttons. This naturally includes the two mouse buttons and the mouse wheel. In addition there are two thumb buttons and a DPI switch. The latter offers a special trick. Sharkoon provides the user with a choice of different DPI switches in the scope of delivery. Everything is possible from strikingly prominent to inconspicuously flat. Thus the DPI switch can be used once for adjustment and then disappear again almost invisibly. This means that it will no longer be a nuisance in future. On top of that, this offers an optical adjustment possibility. Finally, the different DPI switches are available in red, blue and black.

I especially liked the feet of the Sharkoon Light² 200, for which the manufacturer uses polytetrafluoroethylene (PTFE), which ensures the mouse’s maximum speed. The mouse glides almost frictionlessly over the mouse pad, which is a great advantage especially for shooter fans. After all, even the smallest movements of the mouse can be carried out in a flash from left to right or up and down. With that I gained valuable time, which gave me an enormous advantage in the multiplayer match. I also noticed that I could counteract the warping of my weapon in CSGO very effectively. Since these feet wear out over time, Sharkoon directly adds five more to the package. That’s very praiseworthy!

Sharkoon chose the name Light² for a reason. On the one hand this refers to the slim weight of the ultra-light mouse. On the other hand, however, the great lighting of the gaming mouse is immediately noticeable. Bright RGB shines towards the gamer, which can be customized with separate software. Illuminated are a strip on the bottom of the mouse, the company logo inside and the mouse wheel. 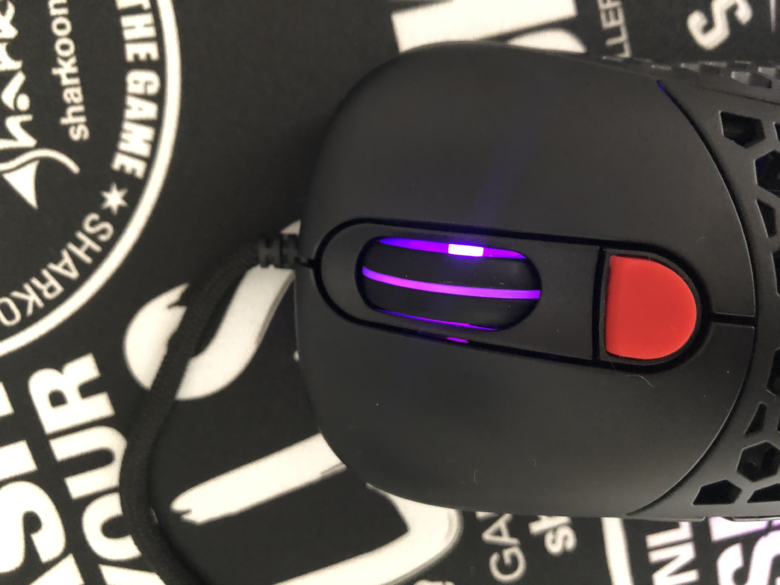 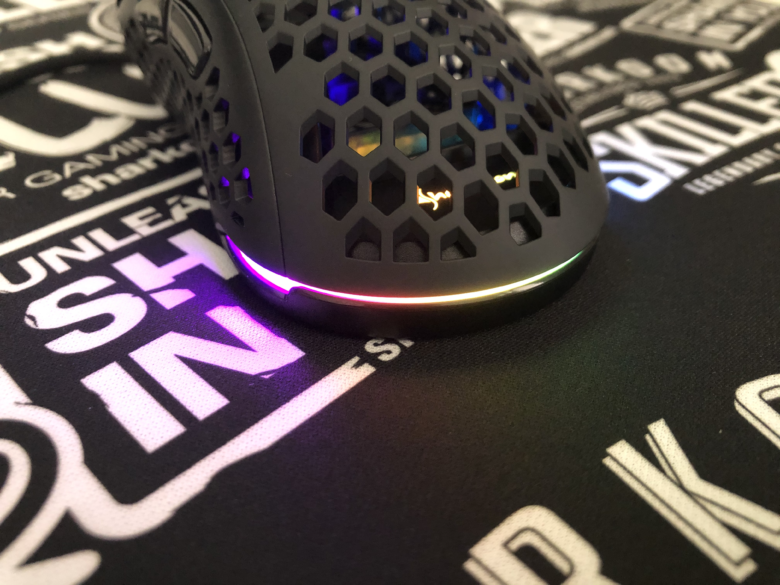 While the light makes a great impression, the software is unfortunately not much more than average. However, Sharkoon has already announced that there will be further improvements. With the help of the software, not only the lighting can be adjusted. The DPI of the mouse can also be adjusted. Fortunately, the fact that the software is not the best does not bother the mouse too much. After all, it offers the possibility of setting all important functions on the peripherals themselves.

First of all, the DPI values can be set. For this purpose an uncomplicated pressure on the DPI button is necessary. In theory, anything is possible up to an inhuman 16,000 DPI. Nobody will use this, but on the data sheet it looks good. But also the polling rate can be set directly on the mouse. There is a corresponding switch on the bottom of the mouse for this purpose. The player has the choice between 125, 500 or 1000 Hz.

A glance at the technical data makes e-sport hearts beat faster. For example, Sharkoon has built one of the best sensors available on the market into the Light² 200 – the PixArt PMW 3389, which is not without reason very popular with gaming mice for e-sports. Above all, the accuracy of the sensor makes it an absolute reference. The two mouse buttons are OMRON switches, which convince above all by their long durability. According to the manufacturer’s specifications, they should withstand up to 20 million clicks. 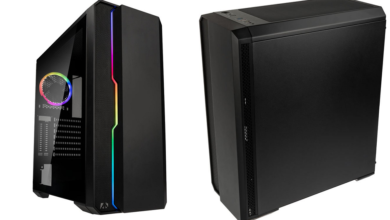