Now we come to system installation. As hardware I use a Intel Xeon 1230v3 on a Gigabyte H87M-D3H with 16GB RAM. The Xeon is cooled by a LC-Power Cosmo Cool LC-CC-120. An HD 7850 2GB from Asus is responsible for the image output. The power supply does the non-modular be quiet! pure power with 400W.

The installation of all components was very quick overall and could also be carried out with large hands due to the very open interior. Features such as the pre-installed spacers or the tool-free assembly of the hard disks have made assembly even easier. Thanks to the good cable management system, a cleanly wired system can be assembled in a short time without great effort. All openings are well placed and the space conditions for laying cables behind the mainboard are good. A maximum of 160 mm and 330 mm are available for CPU coolers and graphics cards. This is sufficient for most pixel accelerators and many CPU coolers with high reading power.

Fans of AiO water cooling should also be happy with the Versa J24 TG. A 240 mm or 360 mm radiator is officially supported in the front. There are also mounting rails in the lid for a 240 mm radiator. Whether a radiator can be mounted here, however, depends on how high the heatspreaders of the main memory or the VRM coolers on the motherboard are.

The tool-free assembly of large hard disks within the plastic frame works well. Due to the lack of decoupling, this unfortunately leads to vibrations during operation. SSDs and 2.5″ hard drives are fixed with four normal screws and can be mounted either behind the mainboard tray or on the power supply cover.

Finally, we come to the temperature measurements. For this I ran Prime95 and Furmark for 15 minutes at a room temperature of 17.5°C and then determined the temperature of the processor and graphics card with the CPUID HWMonitor. All fan profiles were set to “Normal” via the BIOS. After this time, temperatures of 61°C for the processor and 62°C for the graphics card were reached. These are very good values for the system used. Due to the four pre-installed fans, the air flow rate ex works is very high. Negatively, however, it should be noted here that the fans cannot be controlled via the built-in circuit board, which is why they are audible to us. Nevertheless, the PC is less annoying under full load than a PS4 under full steam.

The Versa J24 TG ARGB has RGB control for a maximum of three RGB fans. Furthermore, a fourth fan with a 3-pin connector and a 5V LED strip with a 3-pin connector can be connected. An additional feature is the addressability via the mainboard. In order to guarantee this for as many mainboards as possible, Thermaltake includes a cable for Asus (AURA) Sync, MSI (Mystic Light) or Gigabyte (AORUS RGB Fusion). If the used motherboard does not have one of these connectors, the reset button for switching the modes can also be connected to the board. Unfortunately, the built-in control board also has disadvantages. As already mentioned, none of the fans can be lowered if necessary and the pre-installed RGB fans do not have a standardized connection.

Finally some impressions of the activated RGB fans.

Fractal Design Define 7: Perfection in the next generation? 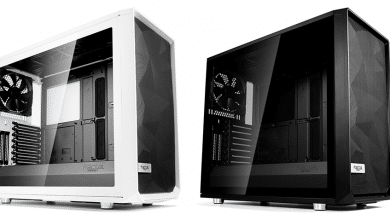