The biggest advantage of an external SSD over an external HDD is its speed. SSDs are expected to be able to copy large amounts of data in no time at all. Western Digital’s “My Passport” must also be able to meet these expectations in order to be competitive.

The manufacturer specifies transfer rates of up to 540 MB per second. Unexpectedly, these values cannot be reached in the test. So far all SSDs tested by us could exceed the manufacturer’s specifications in the benchmarks – or at least have reached them.

The maximum values determined are about 500 MB per second when reading and about 520 MB/s when writing. This is not quite enough for competing products, but it is at a similar level to internal SATA SSDs. These reach top speeds of 560 MB/s. Unfortunately, the bad dissipation of the waste heat is problematic.

The only real point of criticism is the operating temperature. If the SSD is used permanently and over long periods of time, it increases enormously. In our test, temperatures of about 47 degrees were already reached in idle mode (at 22 degrees room temperature). Under load the temperature rose to 75 degrees. Even 75 degrees are still harmless, but unfortunately the SSD has throttled down to not get any warmer. Here, the speed in the benchmarks dropped to about 130 megabytes per second – as fast as a standard external HDD.

In practice, however, overheating is less relevant. When moving large folders with numerous files, the maximum speed is never reached due to many small files. This prevents the SSD from overheating.

All in all, however, it should be noted that no problems are to be expected in normal operation. 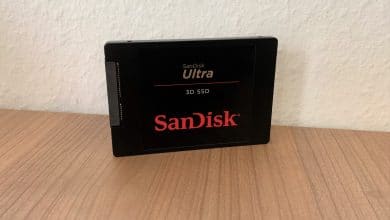