Thermaltake has introduced two new AiO water coolers, named TH120 ARGB Sync and TH240 ARGB Sync. According to the name acts they use a 120 or 240 millimetre radiator.
The complete water-cooling systems are equipped with digitally addressable RGB lighting – both on the pump and on the fans. The lighting can be controlled via the Smart Fan Controller included in the scope of delivery or compatible mainboards. This requires a digital 3-pin ARGB header, which many gaming mainboards now have. The control is then done directly via the mainboard software. 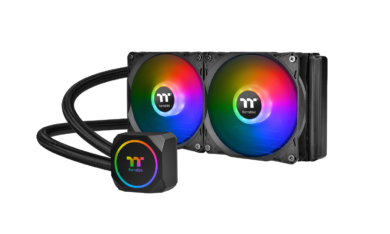 As a special feature Thermaltake mentions the pump, which is to have a particularly low overall height. The pump has a copper plate on the underside to absorb the heat of the processor.
The TH120 uses only a 120 mm fan, while the TH240 uses...
Zum Vergrößern anklicken....