Trust promises that the headset is sound-absorbing. This can be confirmed even after simply putting on the headset. The environment becomes noticeably quieter even without sound from the headphones. If the audio output actually comes from the Wayman, you won’t hear anything about its surroundings. I didn’t even notice the ringing of my mobile alarm clock right next to me – and the volume didn’t have to be particularly high for that.
It can be turned upwards more than enough to hear and understand all possible audio sources.
Both in single and multiplayer, you can easily locate where a sound is coming from.

The GXT 444 Wayman offers a unidirectional microphone that can’t be picked up. It is very sensitive and transmits your own voice without any problems. Depending on what you do and which application you use, the sound from the headphones may also be recorded. But in itself the quality is good and the own voice is recorded clearly, together with a soft noise, which only becomes striking when recordings are played back at high volume.
Here you can listen to a small recording to get an idea of the quality:

No software is included to additionally configure the headset. Accordingly, all microphone settings must be made individually for each application.

The Wayman is padded in several places, both on the ears and on the temple. Unfortunately, it still doesn’t offer much wearing comfort. The headset sits pretty tight and presses on the ears. After about two hours it becomes uncomfortable to use and I have to take it off for at least a few minutes. This is especially unfavorable for a gaming headset, as you like to play for several hours at a time.
Of course, this is only my subjective impression and can behave differently for everyone. In addition, I have a rather small head (about 54 cm circumference), and the rather male target group has a larger one on average. Maybe this has an influence. Nevertheless, this is a point that strongly reduces the overall impression, as the remaining quality is useless if you can’t use it properly. 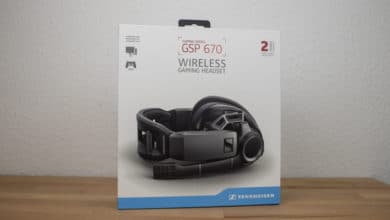