Now we come to system installation. As hardware I use a Intel Xeon 1230v3 on a Gigabyte H87M-D3H with 16GB RAM. The Xeon is identified by Arctic Cooling Liquid Freezer 240 All-in-One Water Cooling with two Fractal Design HP-12 PWM cooled. An HD 7850 2GB from Asus is responsible for the image output. The power supply is done by the non-modular be quiet! Pure Power with 400W.

Because the PURE STEEL has now been built in an unconventional way, it was really refreshing to install the system. The cable management openings are well placed and together with the 20 mm space behind the mainboard allow a tidy system. In addition, there is the generously designed interior, which offers plenty of space for large components. Only with the CPU cooler one cannot install every CPU cooler due to the maximum supported height of 160 mm.

Further features that have made the installation of all parts easier are the tool-free mechanisms, the labelled accessory bags and the attachment for a screwdriver to screw in the spacers. Both side panels have practical pull-out aids and “captive” knurled screws, which remain on the side panel after disassembly. The covers for the PCI slots and the hard disk cages are each secured with a single knurled screw and are easy to remove.

The two pre-installed fans are plain black fans with a maximum speed of 1500 rpm and a 3-pin or 4-pin Molex connector. Unfortunately, the ratio between pumping volume and volume is rather poor. From 900 rpm, both fans can be clearly heard out of the case and produce audible background noise at any speed. Here it might have made more sense to remove both fans and offer the case at a lower price.

Water cooling systems can also be installed in the PURE STEEL. A 360 mm radiator fits in the base and a 240 mm radiator on the side. However, rough measurements have shown that this combination can only be used to a limited extent. Between the fan in the floor and the built-in Artic Freezer Liquid there is still about 20-25 mm space. A total of 50 mm could be quite tight for a radiator including fan.

Finally, we come to the temperatures reached in the PURE STEEL. During the load test, 15 minutes of Prime95 and FurMark were run. At a room temperature of 17.5°C the following values were measured during three different scenarios: all fan settings on Silent (CPU:65°C, GPU:70°C), CPU cooler on Silent and case fan on Full Speed (CPU:61°C, GPU:70°C) and all fan settings on Full Speed (CPU:57°C, GPU:70°C). All in all, the temperatures are in the green range even at lower speeds. 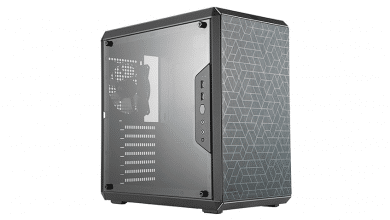